Edit
watch 02:56
Raise a Floppa - The Loop
Do you like this video?
Play Sound

A character's attributes are the six primary statistics defining his or her nature, and are determined during Character Creation. Each attribute represents a particular aspect of the character, and has a significant impact on his or her capabilities in combat and during interactions. Attributes can be seen as the character's inherent abilities, in contrast with Skills which indicate how well a character has learned to perform a specific action.

Attributes are expressed on a scale from 1 to 20+.

Note: Pillars of Eternity only 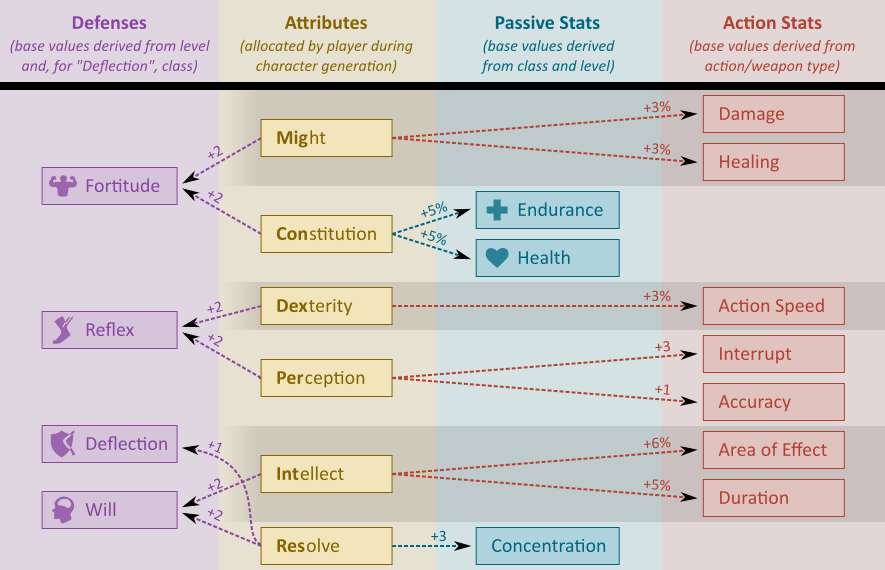 An attribute with a score of 10 gives no bonus or penalty. For each point higher than 10 the character will get a bonus, and for each point lower than 10 a penalty.

For example, if a spell effect nominally lasts 30 seconds, its actual duration is derived from the caster's INT score like so:

The same goes for the other stats, though note that the defense modifiers and the Interrupt/Accuracy modifiers are absolute values rather than percentage modifiers.

In conversations with characters, attribute scores often determine which additional dialog options are unlocked for you to choose from - for example, with high Perception you may notice something about the person you're talking to that others wouldn't have and confront them about it.

Since the main character does all the talking in Pillars of Eternity, only his or her attributes are checked in this way - not those of companions.

These options often determine what outcomes are possible in a quest - especially ones that avoid an immediate fight or affect reputation gained or lost. They often require a very high score for the attribute - 15 or more.

The options that open up can be advantageous, neutral or disadvantageous in a conversation, but they do give you a wider range of expression based on your character's build.

The attribute scores of the main character are selected during Character Creation. Each attribute starts at 10 plus any applicable racial or cultural bonuses/penalties. Players may distribute 15 additional attribute points as they see fit, and can reduce an attribute down to 3 or increase it up to 18 plus the racial/cultural modifier (for example, an Aumaua from the Living Lands culture can have a Might score between 6 and 21).


This means that each character will have 78 attribute points in total - 60 of which (i.e. all except for the mandatory minimums of each attribute) can be allocated by the player.

During character creation some attributes are listed as highly recommended (

) for the given class:

Due to fact that Perception determines Graze/Hit/Critical/Interrupt chance by vast majority of players it is considered to be most important stat regardless of class stat recommendations. Usual suspects for a dump stat are Resolve, Constitution, sometimes even Dexterity.

During the game, characters may benefit from buffs (wearable items, resting bonuses, spells, etc.) or suffer from debuffs (enemy spells/abilities) which temporarily increase or decrease an attribute beyond its base score.

These modifications are not affected by the lower and upper limits that are imposed on attributes during character generation - so with careful stacking of buffs, it is possible for a character to temporarily achieve a score of over 30 in an attribute.

Of course, once the source of the buffs/debuffs is taken away (spell effect wears off, item is unequipped, etc.) the attribute in question reverts back to its base score.

See the individual attribute pages for a list of things that provide such buffs.

In Pillars of Eternity bonuses granted from the same source generally do not stack: only the the highest bonus from a category counts, while the lower ones are "suppressed" and appear greyed out in the character tab. Thus, a character can have only one active bonus to a particular attribute or skill from each of following categories at any time: worn items, food (for attributes only), rites (for skills only), resting, boons, and special talents rewarded for completing quests.

In Pillars of Eternity II: Deadfire, buffs applied from "passive" source (including equipment and passive skills) will stack. Buffs applied from "active" sources (including consumables, food - inherently, modals, and abilities) do not stack together, where generally the last-applied bonus will cancel out any bonuses applied before it.