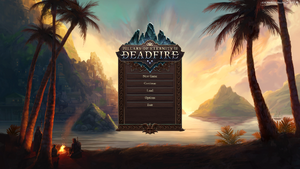 Backer Betas are pre-release versions of the games, open to backers of the game funding campaigns.

Obsidian Entertainment and the games' community use the Betas to collect feedback, thoughts and input about the games' features (and bugs), that then could be implemented into the further development.

Access was granted to backers from the $110 tier upwards or by upgrading their pledge with an additional $25 for the "Early Access Beta Key".[4] News, discussion and feedback were shared in an official forums' subsection, especially created for the Backer Beta (now archived).

Beta builds are only available to backers, and were distributed as unique Steam keys that could be generated via the Obsidian Account profile page. Keys would grant the backer access to only the beta branch of the game, giving backers the option to later redeem their retail copy on either Steam or GOG.[5].

The last beta version (as well as other branches) can be accessed via the Betas tab of the properties window for the game within Steam, assuming a beta key has been activated.[10] Older beta versions can be downloaded via the Steam CLI, using the appropriate ids (see SteamDB).

In retail versions of the game, the backer beta can be enabled with the command line argument -bb. This can be set directly by running the game from the command line, by using a shortcut, or from within Steam with the "Set launch options..." button in the general tab of the properties window for the game. Creating a new game with the backer beta enabled will start the game within the beta setting (see below). Game content (items, quests, etc) will be exactly the same as in the full version of the game, unless an actual beta build is used.

Beta content: The following content is from the game's Beta version and may appear not or different in the final release of the game.

The beta takes place in Dyrford Village and the surrounding wilderness. Created characters have access to all races, subraces, classes, cultures, and backgrounds, and start at level 1 with enough experience to advance to level 5. Not all talents and abilities are implemented. In addition to the created player character, the party includes four pre-made generic characters, a fighter, rogue, priest, and wizard. These premade characters all start at level 5, and wear an assortment of Fine quality gear relevant to their class.[13]

A number of side quests are available, many of which are carried over to the full version of the game. Quests give an artificially-inflated amount experience, ensuring that the party can advance from level 5 to 8. Other game systems are present, including general exploration, conversations, combat, looting, crafting, enchanting, hiring adventurers, camping, stores, inns, and resting. Caed Nua stronghold mechanics are not present. No part of the backer beta has a direct connection to the critical path/main story, and content above level 8 has been omiited (the amount of experience obtainable is capped to level 8).[13]

The Deadfire: Backer Beta was released on November 14, 2017 on Steam and GOG.[14][15] It is available to backers of the Fig game funding campaign at tiers of $99 and above or by pledging an extra $20 in the Backer Portal. Here's also where the installation instructions and key generator can be found.

News and feedback are shared – alongside platform specific forums – in the Obsidian forum community's Pillars of Eternity II: Deadfire (Backer Beta) board. Each month's first Thursday new features are planned to get implemented through an update.

In the retail release of the game you can still access the Backer Beta using the console command BB before starting a new game. Note that using this command on a full release save file will bring with it all the same limitations, and may negatively affect your game. Re-entering the command while in the backer beta world will close the beta scene immediately.

Do NOT use the "Start & Skip Intro" option when creating a new game, as this will start a regular game instead.

Beta content: The following content is from the game's Beta version and may appear not or different in the final release of the game.

The Backer Beta starts with a, compared to its predecessor, visually enhanced Character Creation. Several new features are included, e.g. the choice between "Single Class" or "Multiclass", followed by a possible Subclass. The related ability tree has a preview feature which shows possible abilities of all levels. Weapon Proficiencies have to be chosen, that grant access to additional weapon-dependent modal abilities. The color palettes for character customization have been expanded, as well as an idle "pose" feature being added.

After having created a first level Watcher, the game jumps to the piers of Tikawara, an island in the Deadfire Archipelago, inhabited by the Huana, who are cooperating with the Vailian Trading Company. The Watcher's party – four level 6 mercenaries in addition – just has come off their ship and may now level up to 9.

While the Watcher can leave Tikawara, the world map is limited to a small sub-section of the total world map as it is seen in the full game. A few other ships roam the seas in this area, Well-Weathered Cormio on his ship The Whirlwind, Faina Short Fur on The Red Arrow, and Veen on The Reckless. You can freely engage them in ship combat in your Dhow. Your ship is crewed by a number of crew members not unique to the beta, including Aledh, Beodul, Cathenna Stormheart, Daelan, Eadulf, Grim Kuldran, Irrena, Little Leuca, Shieldsister Daelia and Vanizzi. Beodul and Irrena make an appearance in-person during the Prologue to the full game, being part of the initial crew of The Defiant.

A number of locations are present in the beta for the Watcher to explore. These locations are for the most part the same as they appear in the full game.

The following is a list of differences between the Backer Beta and the full game.