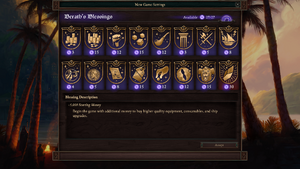 Berath's Blessings are optional upgrades you can select when starting a new game in Pillars of Eternity II: Deadfire. These are a set of additional options meant to change up the beginning of the game, generally by allowing the party to head to more challenging areas faster or reducing the need for exploration.

Each blessing requires a number of points, which are accumulated by completing achievements. There are 174 points worth of blessings, while 105 points can be earned with all DLCs (80 in the base game, 9 in Beast of Winter, 8 in Seeker, Slayer, Survivor, and 8 in The Forgotten Sanctum.)

Points are only used to limit the amount of blessings you can have at once per playthrough. Using points on a new game does not consume them, once you have the points they can be used over and over again.

A number of blessings have not been implemented, including immunity to engagement, increased power levels for the player and party, bonus attributes for the party, the ability to purchase the submarine and the Floating Hangman at Neketaka, and a few others.

Note that this will also unlock all achievements on the associated platform, unless you start the game through the file system and with Steam/GOG closed.