Bounty: Thorfen is a bounty in Pillars of Eternity.

Thorfen, a high priest of Eothas, has been accused of desecrating gravestones, and then of killing Crucible Knights sent to stop him. There's a bounty on his head.

Speak to Warden Fyrgen in the restored Warden's Lodge in Caed Nua and accept this bounty task. He'll only offer it to you after you have completed all of his tier-1 bounty missions:

Once you have the task, travel to Esternwood, and approach the graveyard in the North-West of the map.

Thorfen (a 10th level priest of Eothas) and his party hide out there, and attack as soon as they see you.

consisting of fine and exceptional weapons/armor, about 1000

cash and Coat of Ill Payment). 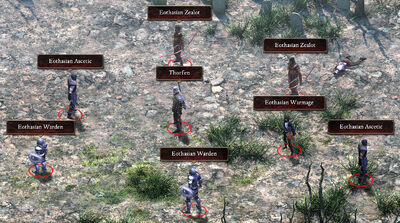