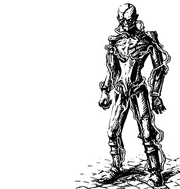 Bestiary image of a Flesh Construct

Constructs are a race of creatures in Pillars of Eternity.

Like animats, flesh constructs are created by animancers and powered by a captive soul. Unlike animats, they are not dependent on the will and loyalty of the bound soul. Flesh constructs, therefore, cannot be undone by doubt, but they are only capable of following simple instructions. They also tend to be shorter-lived than animats. Whereas the energy and faith in an animat's soul can sustain it for decades, even centuries, the soul bound to a flesh construct will gradually fade away from its physical form, and the body will eventually stop responding to the soul's energy. Opponents of animancy in general and soul constructs in particular see this as a soul's rejection of an improper body, and as evidence that flesh constructs are an abomination.

Even among animancers, the creation of flesh constructs is controversial. Some see the process as a "soul lobotomy" and believe that a soul should be allowed to pass on to the next life rather than be used as mindless fuel for a body.