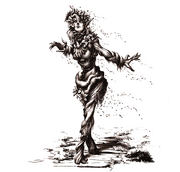 Bestiary image of a Delemgan

Delemgan are a race of creatures in Pillars of Eternity.

These are forest spirits of Eir Glanfath that are bound into ancient (often petrified) trees or adra monuments. They appear to have mostly elven-shaped bodies, but their skin is made of wood and their hair is long and plantlike (adragans appear to have skin made of adra). They glow slightly and have tiny motes of light (like dust caught in a sunbeam) around them. They do not wear clothes, but they are not 'anatomically correct', as they only have the overall shape of humanoids. Delemgan are entirely magical beings and do not use physical weapons to attack. Their attractiveness is used in tandem with their charm magic, typically to stop attackers or lure them to their deaths.

These creatures draw their essence from their environments. While they have physical bodies and can be killed if those bodies are destroyed, their survival also depends on the health of their environment. They feel no natural animosity towards other beings, but they will defend their territories fiercely. Thus, delemgan and adragan (“adra-born”) individually may be more or less hostile depending on the well-being of their locale, and on whether other explorers or adventurers have, in the past, proved dangerous or benign. They are a natural roadblock to large-scale development. While rural tribes in Eir Glanfath often live peacefully alongside them, expanding or developing cities and towns may find themselves beset with hostile delemgan. Some oppose the destruction of delemgan habitats. City-dwellers generally support the notion, believing that their souls will simply reincarnate in other forests or back into folk.

Delemgan are traditionally friendly toward rangers and druids. Their spiritual link with trees has led to greater understanding of the link between rangers and their animal companions, though a definitive connection has yet to be made.

A delempŵgra (“rotten leaf”), more typically called pŵgra (“rotten”), are delemgan gone bad, usually as a result of the corruption of their home tree or adra stone. They are as ugly as delmgan are beautiful, spindly and emaciated with cool tones to their skin. Their hair is dead, dark, and slimy, and their facial features contorted, their teeth long and sharp. Unlike delemgan, they are not surrounded by motes of light, and they are more than willing to attack with their long talons. Pŵgra decorate themselves with the skulls, skins, and feathers of animals they’ve killed. While delemgan may be peaceful, pŵgra never are.

Just as delemgan seek to maintain the health of their forests, pŵgra seek to corrupt them, making the two species mortal enemies. The rot that infects them endows them with poison attacks, but it also makes their bodies weak and brittle, leaving them vulnerable to piercing and crushing attacks.

Since they can no longer draw essence from a healthy forest, they must survive by sucking plants, animals, and folk dry of all energy and essence. This makes them natural allies with shadows, which feed by similar means.

They are hostile toward all life, but rangers and druids are their favored foes.