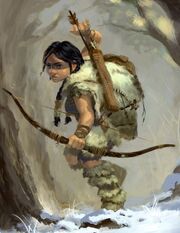 Dwarves are one of the civilized races that inhabit Eora. There is great ethnic diversity between Dwarves in different regions of the world. In Pillars of Eternity two sub-races of dwarves appear, namely mountain dwarves and boreal dwarves.

Dwarves have a cultural predilection (some go so far as to say it's an instinct) to explore. They've actually been some of the earliest colonists in many parts of their world, though their colonies don't have a particularly good rate of survival. e.g. White March.[1]

Physically, dwarves are known for being short and thick-limbed. They tend to be extremely sturdy and durable, often attributed to spending millennia living in rocky environments more suited to goats than people. Their natural lifespan is typically between 110 and 190 years.[2]

Enutanik (eh-NOO-tah-nik, “people of the tundra,” Enutanik) Boreal dwarves are originally from a southern Boreal region. Most boreal dwarves live in the remote southern island of Naasitaq, where they share the rocky tundra and snow-covered forests with migratory pale elves who drift near the shoreline and the coast-hugging ships of aumaua. Like their northern cousins, Enutanik share an instinctive drive to explore and cover long distances in spite of their small stature. Boreal dwarves are extremely rare in Aedyr, more common in the Vailian Republics, and seldom encountered in the Dyrwood or Readceras. [2][3]

Aptapo (AHP-tah-po, from aptapolare “goat people,” Vailian) Mountain Dwarves originated on the continent to the east of the Dyrwood, but have spread through the area several times before, with most of the evidence being found in remote mountain ranges.[2] Unlike the similarly diminutive orlans, who are frequently subjugated, the Aptapo have always directly fought back threats posed by larger kith and opted to fortify their residences rather than move on. Mountain dwarves are common in the Vailian Republics and uncommon in the Dyrwood and Readceras. They are rarely encountered in Aedyr, most often traveling with Vailian trading ships.[2]

Dwarves are known for their great strength and tenacity, and gain:

In addition, each dwarven sub-race gains a different racial ability:

The White March - Part I