The Free Palatinate of Dyrwood is comprised of several Erldoms. Prior to the War of Defiance (often known as "the revolution"), there were 9 erldoms. After the war, two erldoms loyal to Aedyr were dissolved into other erldoms.[1] 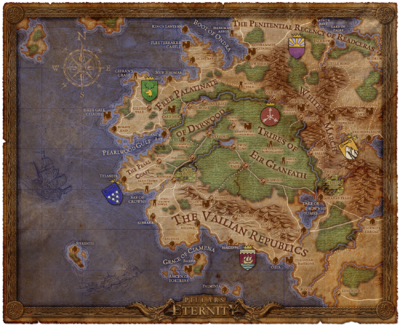 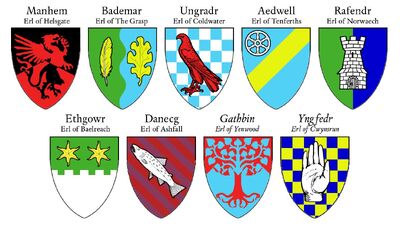 The coat of arms of each of the seven current erldoms, and the two dissolved erldoms 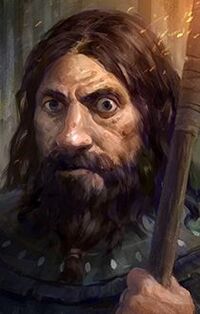 Ashfall is the location of the War of Black Trees, a conflict that happened 171 years before the events of Pillars of Eternity. In a tactical move, Admeth Hadret scorched the forests to prevent the opposing Glanfathan forces from retreating.[2]

The war left permanent marks on the land, leaving some of it still barren and littered with burnt trees.[3]

Ashfall became an important place to worshipers of Magran, where they craft guns and explosives. A group of twelve Marganite priests from the area crafted the Godhammer Bomb that was used to stop Waidwen during the Saint's War.[4]

A massive cathedral complex dedicated to the goddess. Impervious to flame on the surface, it's notable for its endless subterranean tunnels and chambers, bellows and fire pits, where Magranic scholars work on new ways to bring fire to the world: Guns, explosives, alchemy.

The Abbey is located near the border of Ashfall and Eir Glanfath. The resident monks have not sworn fealty to any sovereign.[1] 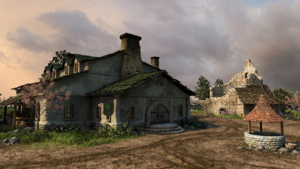 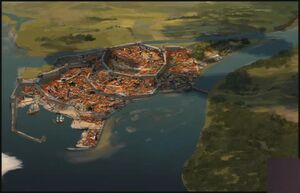 Baelreach is the oldest part of Dyrwood. The area of Dyrford was the first Aedyre settlement in the region and was followed by additional settlements west and north of the Bael River. New Dunryd, renamed to Defiance Bay after the War of Defiance, became the seat of power in the region.[7] Ondra's Gift was the final battle site of the war in 2672. Animancy, which had been outlawed in Aedyr, saw a revival in the area after the war.[8]

Location of the "Baelreach incident" where an animancer accidently shattered the souls of twelve volunteers.[8]

Coldwater is described "one of the most placid erldoms". It incorporated the erldom Cwynsrun after the War of Defiance.

During the Saint's War, Readcerans forces passed through the area and burned the city of Mercy Vale.[9]

Residents let Waidwen forces march through the town during the Saint's War, allowing two brigades to enter Dyrwood unopposed.[9] The town was the first to be hit by mobs during the Purges.[10] Many residents died in the razing, including the family of the Devil of Caroc.[11]

Razed by Waidwen forces after they marched though Cold Morn.[9] Citizens held back the Readcerans for several days and its believed the delay allowed the time needed to ready the Godhammer Bomb.[12]

Efforts were made following the war to restore the town, including the Magranite Church of of the Winding Flame, where several holy relics had been lost during the siege but later returned.[13]

The erldom was named after the Aedyren Mecwyn Eina II by imperial decree because she loved the area so much. She died just south of the territory in Eina's Rest.

Cwynsrun sided with Aedyr during the War of Defiance. After the revolution Cwynsrun was incorporated into Coldwater.[1]

The lands between Geiran's Grasp and Gilded Vale (now considered part of The Grasp) were originally ruled by House Geiran, an old elven family that traditionally served the Kulklin mecwyn of the Aedyr.[14]

After the War of Defiance it became the largest of the seven erldoms when Yenwood was partitioned and granted to erls who supported the push for independence. It is also said to be the most difficult to manage.[1]

In 2823, lord Raedric VII, thayn of Gilded Vale, attempted to lure new settlers to the area with land offers. The Watcher was one of those who traveled to the area and became the roadwarden of Caed Nua.[15]

In 2828, Eothas, embodied in the great statue of Maros Nua, emerged from beneath Caed Nua.[6] He traveled westward towards the ocean, eventually entering the gulf northwest of Defiance Bay.[16] The incident destroyed Caed Nua, killed over 300 people, and left a path of destruction.[17]

An old coastal town named after House Geiran, the original rulers of lands in the northwestern corner of the Grasp.

A port city that's home to a chapter of Bleak Walkers.

In 2626, Helsgate was the site of the Broken Stone War, a conflict between Aedyr settlers and the Glanfathan. It was an important strategic location during the War of Defiance and saw violent conflicts during the period.

In recent times it is considered one of the most sedate nations.[1]

Home to to a group of bell masters who keep watch from the citadel.[18]

A port city home to charnel houses and cemeteries, including Kell Hill Cemetery.[19][20] 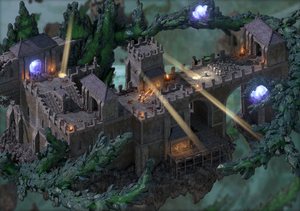 The Evon Dewr bridge just outside Godhammer Citadel from The Bridge Ablaze.

In 2808 Norwaech saw the final conflict of the Saint's War. Waidwen was lured into a trap on the Evon Dewr bridge and destroyed by the Godhammer Bomb.[9]

Tenferths was named for the ten fords along its wandering cost.[1]

Caed Nua began construction circa 2626 atop ancient Engwithan ruins. The erl, Gathbin, accidentally unleashed a slaughter when he opened the Endless Paths of Od Nua.[6]

Yenwood sided with Aedyr during the War of Defiance. After the revolution Yenwood was incorporated into the Grasp.[1]