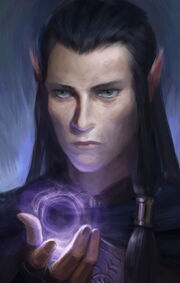 Elves are one of the civilized races that inhabit Eora. There is great ethnic diversity between elves in different regions of the world. In Pillars of Eternity two sub-races of elves appear, namely Wood elves and Pale elves.

Elves are the second most common race in Dyrwood and heavily populate both the Aedyr-founded colonies and the deep reaches of Eir Glanfath. Elf-dominated cultures are among the least expansive and colonial, the Aedyr being a notable exception. Physically, elves are known for their speed. They tend to be about 10% shorter than humans and slighter of build.[1]

Glamfellen (GLAHM-fel-len, “twilight dwellers,” Glamfellen) Pale Elves are known to live in the The White that Wends, a huge southern expanse of polar ice. They appear to be among the most stationary ethnic groups in the known world, migrating within the polar region but seldom venturing far north. They are rare in all northern lands and have minimal contact with outside world. Outside of Boreal Dwarves and some far-traveled Aumaua, very few people have any contact with Glamfellen, most consider them exotic (if they have seen one at all).[1][2] Pale Elves are borderline albinos, slightly taller than Sceltrfolc (wood elves), and the males can (and often do) grow facial hair. Some have epicanthic folds, but it is not universally common.[2]

Sceltrfolc (SKEL-trr-folk, “sheltered people,” Hylspeak) aka Cythwod (SEETHwod, home wood," Aedyran) Wood elves originated approximately 3,500 miles north of present Day Aedyr, south of where the Thyrtan are believed to have lived long ago.[3] They migrated south over thousands of years, and today cover most of the western continent shared with the Aedyr Empire. In some pre-historical era, a large number of them migrated across the sea to Eir Glanfath.[1] Today Wood elves are the dominant elven subrace in both Aedyr Empire and Eir Glanfath region.[4]

Glanfathan Sceltrfolc are physiologically very similar to Aedyran Sceltrfolc --looking like bog-standard fantasy elves and they can't grow any facial hair-- but besides that they share neither culture nor language.[5][6] Their natural lifespan is typically 200-310 years.[1]

Elves are known for their speed and intelligence as well as their commonly isolationist nature, and gain:

In addition, each elven sub-race gains a different racial ability:

The White March - Part I