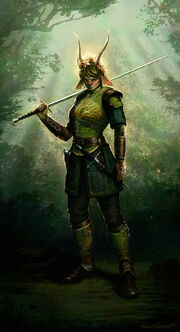 Godlike are one of the civilized races that inhabit Eora. They are beings that are thought to be "blessed" by the gods before birth. While far less common than the other races due to their rarity and inability to reproduce, godlikes exist throughout Eora, albeit in low numbers. Depending on the social view of the culture they are born to, godlikes are often either glorified as a physical embodiment of a god, or shunned and outcast as an abomination.

As far as anyone can tell, godlike can be born to any race in any part of Eora. They are children of humanoids (most often humans) who have been "blessed"[2] before birth[3] (or cursed, depending on personal or social view) with the physical manifestation of a divine spark granted by the gods. Godlike manifest their divine heritage in a variety of ways: wings, horns, strange birthmarks, talons, odd eyes - but they always manifest it somehow.[2] Though their appearance may vary, there's something unmistakably otherworldly about them.[3] Godlike are viewed differently by the various factions, faiths, and cultures of the world. Sometimes, the reaction they get is overwhelmingly positive, such as in the Deadfire Archipelago among the indigenous Huana tribes. Many times, the reaction is overwhelmingly not.[3]

Godlikes cannot reproduce, making marriage difficult for godlike in many areas as most societies consider marriage to exist mainly for the purpose of producing heirs. In the Vailian Republics, godlike are legally considered to be without sex or gender regardless of how they appear or self-identify. Legal constructs that explicitly name (favorably or unfavorably) sexes or genders can cause problems for them.[4]

The Vailian animancer Giacolo has made it his life's work to study the godlike, and discovered that each has a unique "chime" within their souls. He has developed technology able to detect such chimes in utero. If this chime is severed while the godlike is prepubescent or in early puberty, many of their distinct features will fail to manifest, and the ones they have already developed will be reduced (although not entirely removed). While they are still not entirely normal, they retain an appearance much closer to the standards of the race of their parents. He also created an amulet that can enhance godlike with new abilities by creating a harmonious chime.

From the Pillars of Eternity Guidebook: Volume One:

There are many different sub-races of Godlikes that were "blessed" before birth by different deities of the world and manifest their divine heritage in a variety of ways.

All godlike share one common function: They act as failsafes for the gods, who can elect to possess their bodies if they are killed or used as living batteries to empower the gods with their souls. With thousands of godlikes across the world, it's a potent reservoir of power. The gods think nothing of this potential mass sacrifice, believing theirs is the greater good.[10]

Godlike are handled differently than the other races in character generation. In Pillars of Eternity you choose the type and the parent's race instead of choosing a sub-race. In Pillars of Eternity II: Deadfire, after choosing godlike as a race, you select the subrace then a "body type" (where the body is that of of all other races). Selection of a godlike subrace is limited to one of four godlikes: Death, Fire, Moon and Nature.

All godlike get attribute bonuses to their Dexterity and Intellect, but due to their head shapes (and in many cases a presence of horns), they're unable to wear headgear.

Each subtype has a different passive bonus that is a little more powerful than passive bonuses from other races. [11][12] In Deadfire, a few of the godlike subraces have two bonuses.

Godlike have been compared to aasimar, tieflings, and genasi of the Dungeons and Dragons series.[3]