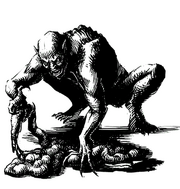 Journal image of a Gul.

Guls are a type of creature in the world of Pillars of Eternity. Corporeal undead in this world all suffer from the same disease, and are merely in different stages of decomposition.

The soul of an undead isn't leaving the body, but the body is slowly decomposing. The undead also get weird cravings after human flesh. If the undead eats human flesh the decomposing stops, but after a while they start to rot again. Eating humans and absorbing the essence from their flesh is the only way to stop decomposition. If they don't eat human flesh they rot and their IQ drops and in time, the mind goes as well as the body. They become feral, then near-vegetative, then purely mechanical - the body nothing more than a fleshless marionette.[1]

One way to create undead is by binding the soul to the body, which can be preformed by an animancer. The animancer sets up some bizarre tools and machines, has the person hold onto some copper wires and after this person dies he or she becomes an undead. But there are supposedly other ways - certain alchemical tinctures and ancient architecturally-embedded machinery.[1]

There are five decomposition stages of corporeal undead:[1]