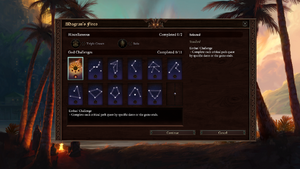 Magran's Fires are optional challenges you can select when starting a new game in Pillars of Eternity II: Deadfire (by clicking the head at the bottom of the main menu). These generally make the game more difficult and are aimed at veteran players or those looking to replicate the achievement-related challenges found in Pillars of Eternity and The White March - Part I + The White March - Part II.

Whilst in-game, enabled challenges will be listed at the bottom of the difficulty menu in the settings.

During Eothas' challenge, the player must complete the following quests before specific dates. These are always a set amount of days from the start of the game, noting that Pillars of Eternity II: Deadfire begins on the 18th of Mid Spring (Majprima), 2828 AI, at hour 6/7. To assist, a timer is shown in the top right of the screen, and the date of completion is shown in the journal. The hour of completion is always hour 6.

While Galawain's Challenge is active all enemy Beasts gain one of the following effects at random:

When Abydon's challenge is enabled, armor, weapon, and shield items are able to wear and take damage from use. Every time the character takes any damage, 1 point of wear is dealt to all currently equipped items (excluding non-armor/weapons/shields, and weapon sets that are not active). After a certain amount of wear, one of three item mods are added to the item, each representing a certain level of degradation. When this occurs, text is shown on the screen e.g. "Armor Damaged!", and a notice is logged to the combat log.

Damaged items may be repaired via the enchanting interface, costing a fixed amount of

plus a percentage of the shop/full value of the item (this, as with most enchantments, is doubled if the item is a two-handed weapon). When an item is repaired, its wear is reset to zero, and the currently-applied damage mod is cleared. Once the item's wear goes beyond a threshold, the item is destroyed forever and is replaced with a broken item.

Quest items can be damaged, but cannot be broken.

By default the current wear of an item is hidden, however the console command ToggleDurabilityDebug can be freely used if needed (even without IRoll20s).

*Resulting value is doubled if the weapon is two-handed.

Food and drink items spoil after a certain amount of time (after being added to the stash). Keep in mind that 1 day in-game is 27 hours, and that the game speed is 24x real time (1 hour in-game takes 2.5 minutes in real time).

The following consumables are considered to be "prepared" meals.

The Ultimate challenge was added in patch 6.1 (5.0.0.0040). It enables all other God Challenges, Trial of Iron, Path of the Damned, and Solo mode all at once, making the game extremely difficult. As with the other challenges, it also disables console commands/cheats, and mods. The challenge and its objectives are tracked with a quest that is added to the journal upon starting a new game. The challenge itself involves killing a number of Mega Bosses and powerful enemies encountered throughout the course of the game and its expansions.

Being one of the first 12 players to complete the challenge it would earn the player a spot on The Ultimate "Roll of Honor", a physical plaque in Obsidian's studio lobby that would immortalize their achievement. In addition, the first 50 players would be sent a special Josh Sawyer patch to celebrate.