Ofecchia Channel is a location in Pillars of Eternity II: Deadfire.

The only known passage through Magran's Teeth, granting access to the waters inside Ondra's Mortar. The channel marks the end of the volcanic portion of the teeth, with the remaining stretch of islands to the east being more forest and mountain, bordering the very edges of the archipelago. 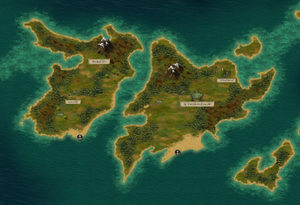 Two islands separated by a shallow river. The eastern once contains Uamoru the Pretender for a bounty, while the western one has Sentinel Hill, a Flooded Cave occupied by an ancient lich, and fruit orchards. You encounter a mass of spirits over at the Hill, in the midst of a ritual of some sort. 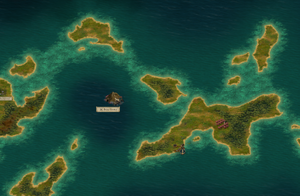 The second set of islands seems friendlier. A koīki orchard can be accessed with the dock on the right, serving as a spot to exchange food and other goods. However the center of the lagoon to the left is home to something nastier, the crazed wizard Sigilmaster Auranic - one of the few mega bosses in Deadfire.