Ondra's Gift is a district of Defiance Bay in Pillars of Eternity.

Ondra's Gift is the poorest district in Defiance Bay, named as such due to the fact it was built on swamps drained by imperial engineers. Protected from the sea by a vast adra levee, the district is the beating heart of the city's economy and its gateway to the world. As such, it's filled with sailors, commoners, traders, thugs, and everyone else who stands to profit from all the commerce flowing to and from the city. The scars left by the War of Defiance have been covered well, but an entire section of the district remains flooded, the remains of buildings used as foundation for piers and quays.[1][2]

The floods were deliberately engineered at the end of the War of Defiance, as one of the finishing blows to the Aedyran military. The whole district was supposed to be evacuated, but not everyone left in time and the Aedyrans put anyone they found to the sword. The lucky ones who escaped the slaughter drowned hours later when Hadret's forces broke the dams to eliminate the Aedyran military. Though much of the district was reclaimed, the sheer number of casualties led to the rise of numerous superstitions, particularly ones tied to the abandoned lighthouse. 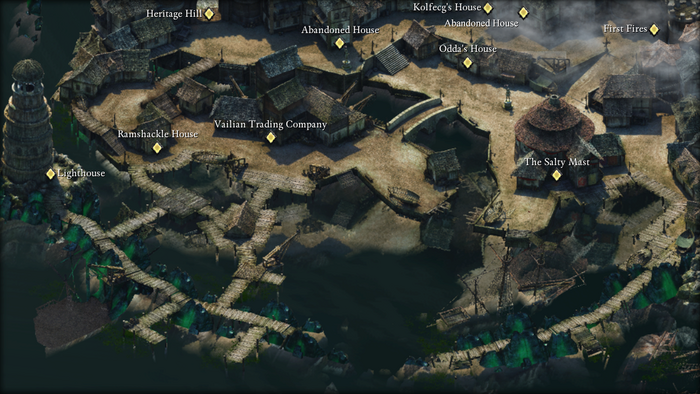 Some companions have a special comment upon visiting the docks of the district:

Sack: [Hidden stash in the southeast under one wooden pierplank]

Mud: [Hidden stash in the northern shallows, accessible only at low tide]

Wooden Box: [Hidden stash in the southern shallows, accessible only at low tide]

Mud: [Hidden stash in the shallows near Derrin, accessible only at low tide]