A Party is a group of adventurers and companions who will accompany the players through the world of Eora.

In Pillars of Eternity, Players can travel through the game world with up to 5 followers. At the beginning you create only your own character, the rest must be added during your adventures. You can do that in two ways. First hire adventurers at the Adventurer's Hall or inn. Second recruit companions met while exploring the game world. There are eight such companions in the game, raised to 10 and 11 in Part I and Part II of The White March expansion, respectively. Each of them has their own unique history, personality and goal they want to achieve. After a character joins your group, you gain complete control over them, you can give them orders, change their equipment or pick skills and talents after gaining a level. Beware, all party members can die permanently.

In Deadfire, the party works much the same way, with companions scattered throughout the world and adventurers available at any inn. However, the party limit has been lowered to five (the Watcher and four others). There are 11 companions in the base game, with one more added in both Beast of Winter and Rum Runner's Pack.

The party and its composition give players strategic management options that expand their capabilities in exploration, combat, and quest resolution. However, the party is optional, the Player can explore the entire world and its story on their own if they so choose. Companions are excellent sounding boards for the player's (and other companions') actions, but the story is ultimately about the player's personal conflict among the larger social and political complexities of the world.[1] 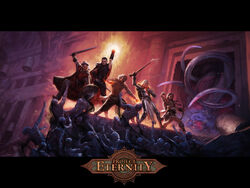 Companions met while exploring the game world. There are eleven such companions in the game. Each of them has their own unique history, personality and goal they wants to achieve. Although you meet those companions in different phases of the game, they always have same level as you. You should add all companions to the party as quickly as possible. Thanks to that, you will have more control over their abilities.

The companions are designed with distinct personalities, voices, character arcs, and lots of reactivity. The Companions cover many of the races, classes, and cultures and will help the setting come alive and hopefully become a place players will find themselves wanting to stay awhile. Each companion, in a sense, becomes an ambassador for his or her race, culture, and class. They have a driving interest in the player's central conflict and are influenced by player-character background and the ongoing decisions. They have their own mini-arc and quest woven into the game, which will be affected based on the player's decisions and interactions with them. Like the player, the companions will also have a wide range of endings based on the player's decisions and interactions with them.[2][3]

Since all party members can die permanently, it's possible to create and hire adventurers in the Adventurer's Hall if you run out of companions, but these characters won't have developed background stories, personalities and dialogue.

Custom adventurers can be created by hiring them from any inn. These customized party members don't have the same depth of characterization and writing as the companions, but the option exists to prevent players from being stuck with party members they don't enjoy and to allow players to experiment with unusual party configurations (such as a party composed entirely of warriors or healers, which Obsidian stated is something they want to support as much as possible).

You can hire up to 8 adventurers. It is the easiest and quickest way to increase size of your party. To do so you must find an inn - there is at least one in every village and city -- and talk with the innkeeper, he will allow you to recruit an adventurer. Maximum level of adventurer that you can recruit depends on your main character level, it is one point lower. For every adventurer level you pay 250 coins, which means that if you recruit an 8th-level character, you must pay 2000 for him.

It is better to hire adventurers early in the game when they are cheap to round out your party, and level-up for free along-side you until more interesting story-based companions join you. Then when you have over 5 companions, the leftover can be retired to Stronghold missions.

When you decide upon a specific adventurer, you will be moved to the Character Creation screen, known from the beginning of the game. You can pick all parameters of your future ally. Newly created character will be on first level, but you will be able to immediately level up it to the level you have bought.[4]

Other possible members of the party include animal companions and pets, neither of which count towards the party limit. Animal companions are available at the start of the game to all Ranger characters. They fight at the ranger's directions. Available animal companion species include antelope, bear, boar, lion, stag and wolf. Pets are technically considered to be items in the game, but when placed in the inventory pet slot, they follow the player character around, but cannot be attacked or otherwise targeted. 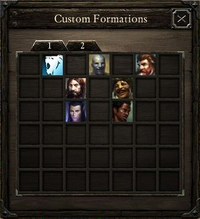 A key element of the classic party-based tactical combat is the use of party formations. In Pillars of Eternity you can arrange your party, including animal companions, in a number of set formations. You can also construct your own formations if you want to get fancy. When moving companions, you have the ability to rotate formations for more precise positioning. (Right-click, Hold, and Drag).[5]

As a general rule, put the party members you want to be getting into melee combat at the frontline and your more fragile characters towards the rear. Drag portraits around on the main screen (bottom left) to arrange them in order. It can be a good idea to have a couple of formations--one for outside, open areas, and one more compact one for the confined dungeon-type corridors.

Consider also having a formation for scouting, with the characters with the highest stealth at the front. This will give you more advance warning of traps and enemies.

Keep in mind that your casting characters will often need a line of sight, so even if they begin at the back they’ll need to be able to get into position once a fight really gets going.[6] This is particularly important for spell casters, whose spells often hit everything in the line of sight, possibly dealing friendly fire damage.

Maintaining formations can be tricky, as the position each character occupies is determined by the order at the bottom left of the exploration screen, and this order changes whenever you dismiss or recruit members. Each time you change the party, re-order them so that they occupy the positions you want in the formation. Also review your two custom formations, and adjust if necessary.