Reputation is the opinion of the public toward a person or a group of people. In Pillars of Eternity, you have a reputation with various factions and individual communities you encounter, which can be positive, negative or mixed reputation.

There are many different factions and communities in the Eastern Reaches, and you can develop a distinct relationship with each one. Your reputation changes based on actions you make towards each faction/community, and their current conflicts. Reputation can be modified in 3 ways: by completing quests, making certain dialogue choices, and by attacking members of that reputation (the latter of which, of course, always results in negative reputation.) You can see what dialogue options will result in a reputation change if "Show Personality/Reputation" is enabled. Note that this is automatically disabled if you are playing in expert mode.

Reputation has no inherent benefits or drawbacks (other than improving prices at faction vendors), but there are quests and dialogue options that change depending on the player's reputation. For example, one way to progress through Fragments of a Scattered Faith is by having a high enough reputation with Defiance Bay. 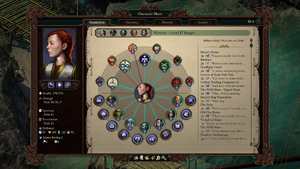 There are three types of reputations you can have with a faction: positive, negative (good, bad in Deadfire), and mixed. Losing reputation and gaining reputation don't cancel each other out, but instead are tracked separately. If your positive and negative reputation are around the same, your overall reputation will be mixed.

In addition to the type of reputation, there is also a rank, showing how well your reputation is received. The ranks are as follows:

First, a reputation percentage of both your positive and negative reputation score is calculated.

Each of these is translated into an index given the following thresholds. Note that the percentage ranges are lower limit inclusive and upper limit exclusive.

Finally, a lookup is used to determine the overall rank given the positive and negative reputation index.

The following factions have their reputations tracked over the course of the game. Keep in mind that factions have different thresholds for ranks. For example, to go up in rank for Defiance Bay, you may need to complete quite a few quests, but for a smaller faction like House Doemenel, a single quest could be sufficient to increase your rank. This value is called the faction scale, and is shown in the brackets next to the faction.

Factions marked with a '*' are major factions.