Campsite example from an early screenshot 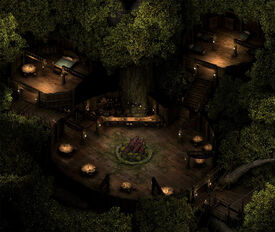 Resting will restore characters to full Health, remove Maimed and other long-term afflictions, and restore all per-rest abilities, spells, talents and item charges[1] and is the only way to do so.

You can unlock the ability to choose a Survival Bonus when resting in the wild. For information on Racial Accuracy Bonus options refer to: Creature

The Player and his party can only rest at safe locations. During your adventures you can rest outside with camping supplies, which are limited based on the difficulty you choose; or you can rest in inns, which are found in certain urban locations and your stronghold house both of which offer long-term bonuses.

To rest, all you need to do is press the rest button. The game checks to make sure it's okay to camp in that location at that time and will give you the option to access your Stash or go directly into rest.[2] Resting always takes 8 hours. While resting in the wilderness the party is safe from the surroundings, since there are no random encounters[1], but creatures may re-spawn in certain areas if you do so, however, this won't always be the case.[3]

You can build your own camp sites using your Camp Supplies. Each time the party rests in the middle of nowhere, they consume 1 unit of Camping Supplies. Based on your difficulty settings, the party can carry a maximum number of Camp Supplies (currently ranging from 6 to 2). The supplies are a single item type and can be purchased from vendors (also rarely can be found in the world). The supplies represent a party count, like wealth, and are represented by a number in the inventory and on the rest button in the main UI.[2]

Resting at inns (including your stronghold once you acquire it) can grant additional bonuses. Based on the room you select at the inn, you will gain temporary bonuses that generally correlate to the expense of the room. I.e., more expensive rooms grant larger or more bonuses.

If you sleep at your stronghold, you select from the bonuses you've unlocked from your upgrades. These tend to be less varied than those found at inns and you have to pay for the upgrades upfront, but after that it's effectively a free bonus of one specific type that lasts for a number of rests.[2] Other inns can give resting bonuses that you can't get with resting at your stronghold.[4]