Scouting Mode (also simply called stealth mode or sneaking) is a modal character state that can be toggled on a per character basis. It is primarily used to avoid Detection, a change of state where a character or creature becomes aware of your presence. Scouting mode goes hand-in-hand with the Stealth skill, and it can be used to circumvent encounters, scope out an area ahead of the party, set up good positions from which to start a fight, and pickpocket from unsuspecting characters without drawing suspicion.

While stealthed, a characters movement speed is reduced to walking speed, and their recovery time is reduced by -85%, making most actions recover nearly instantly.

As the name would suggest, scouting mode is also a factor in finding hidden objects and traps. If a character is not in scouting mode, they receive a -4 penalty to their Mechanics score when detecting objects. This can make it impossible to detect some objects that would otherwise be detected just fine. Note that this only applies for Pillars of Eternity - scouting mode has no effect on object detection in Deadfire.

The suspicion indicator in stealth. The fill amount is a suspicion value of 0-100, wrapping around (and turning red) for values above 100. The eye icon within the circle indicates that the character is within sight of an NPC.
Left - No suspicion
Middle - Increasing suspicion (~33)
Right - The character is being investigated (~166)

When entering scouting mode, the circle under the character's feet becomes dotted and their movement is reduced to walking speed.

The scouting state ends when:

While sneaking, this circle is used to show the maximum "suspicion" level of NPCs around the character, and fills up as the character draws more suspicion.

The circle is initially empty - as long as scouting mode was entered more than 16 meters from an NPC, or out of their direct line-of-sight. It starts to fill up yellow when getting too close to any NPC, and continues to fill up at a rate inversely proportional (more or less) to the distance between the two protagonists. In other words, if the ally stands at the very edge of the NPC's detection radii, the ally's circle will slowly fill up yellow. If the ally or NPC get closer to each other, the fill rate increases. Nothing more happens at this point (NPC don't react yet). This is just a warning to the player.

When the circle is filled with yellow color, hostile NPCs goes into investigation state and approaches the ally while the circle starts to fill red with the same rate rules. At this point, the ally is not visible yet (mechanically speaking, the scouting mode is not disclosed), but usually will be visible soon as the enemy is approaching (unless the ally flees in time, which can be difficult since its speed is greatly reduced).

When the circle is filled with red color, ally is detected. If the detecting NPC is hostile, scouting mode is cancelled and combat starts. Note that if the NPC is friendly, he/she will not investigate and scouting mode will not be cancelled, though stealing items will be noticed by the NPC and he/she may even become hostile (you can steal items unnoticed as long as the circle is empty or yellow).

The Stealth skill of the party member determines the fill rate of the circle (not the distance at which the circle starts to fill up).

The following table lists the perception radius of an NPC given their perceptiveness. The actual detection radius is double of either: half this radius or the character's model diameter - whichever is larger. The default perception level is Normal (5m radius).

The Stealth system in Pillars of Eternity is deterministic, not random.[1] Light-level, facing, or other mechanics aren't used as part of stealth because it becomes extremely complicated and difficult with six characters[2]

Originally the stealth system in Pillars of Eternity was designed so that the player character had a "stealth distance", which would determine how close a party member could get to enemies without being detected (instead of this being a factor per-NPC) - without any concept of detection rate or suspicion. In this system, having a smaller stealth distance was better. This value was calculated based on the character's radius, their stealth level, as well as the average stealth level of the party, with a multiplier applied based on whether the party member was making any noise.

The stealth system in Pillars of Eternity II: Deadfire is based on the same basic principles, but adds a few more mechanics which change much of how detection works while in stealth.

Note that while sneaking, you can hover over an NPC to view their hearing radius and cone of vision.

The following is a list of different detection settings used for creatures and NPCs: 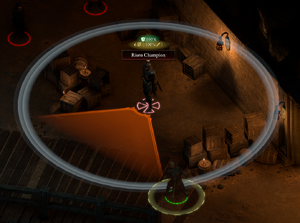 The hearing radius and cone-of-vision in Deadfire
The radius is only shown while the player or companion is within it, while the cone of vision is always shown (orange) until a party member enters, turning it red.

The rate of detection is determined by two main factors:

While in the process of being detected, an NPC's suspicion towards a character increases by a base suspicion rate with a number of modifiers applied that take these factors into account. A separate suspicion level is calculated for each party member being detected. At the same time, each party member keeps track of all NPC's that have suspicion towards them. The NPC will begin to investigate a character once their suspicion reaches 100, and will detect the character when it reaches 200 or more. The fill amount of the circular suspicion indicator uses the highest suspicion level of all detecting NPCs, and is out of 100 (values > 100 wrap around, and change the indicator to red).

In Pillars of Eternity II: Deadfire, NPC's use both their hearing and vision to detect characters. These sensing methods use the exact same calculation, but increase suspicion at a different base rate. They both take the character's Stealth skill and NPC level into account, however only hearing is influenced by the distance between the character and the NPC. If the character is within the hearing radius, and the cone of vision of the NPC, the result from both sources is added together.

In Pillars of Eternity, the only way an NPC is able to detect characters is via their detection radius. Other than this, noise made by the character causes the NPC to immediately enter an investigation state (suspicion >= 100) if they are within twice the noise radius.

If you can't physically see an NPC, are more than 16 meters from an NPC, or if you don't have direct line of sight with them (i.e. when there's a wall or obstacle in the way), they will not be able to detect you and the suspicion will not be changed regardless.

Once the character leaves the detection radius (hearing radius and cone of vision), the NPC's suspicion level will begin to drop after a short delay (0.75 seconds). It will then be reduced at a rate of 15 units per second, until it reaches zero.

The following is a detailed overview of factors that contribute to the suspicion rate:

Distance does not apply to the cone of vision calculation, and it instead uses a constant distance multiplier of 0.5, which will increase the suspicion at a rate of 40 per second (not taking into account Stealth vs NPC level).

Firstly, a radius is calculated which represents the sum of the model radius of both the enemy and the party member. This is done so that measurements are from the edge of both party's models, rather than from the center of their position, otherwise you could be standing on top of a character and still be some distance from them. Most characters have a radius of 0.5 meters.

Note that in actuality, the distance is originally squared as a result of using a performant vector distance calculation, so the square root would have to be calculated for this - but is not shown here for simplicity.

For the cone-of-vision calculation, distancePercent is fixed at 1.0, therefore distance is not taken into account.

Finally the rate is as simple as rate = baseSuspicionRate * distanceMultiplier. As previously mentioned, the baseSuspicionRate is 40 for hearing, and 80 for vision. Internally the rate is also multiplied by the current frame time to determine the exact change on this frame, but can be ignored for the purposes of this example and is therefore shown as a per-second value.

The difference between the character's Stealth skill and the NPC's level is taken into account as a modifier to the suspicion rate (as calculated above). If your Stealth skill level is at least 75% of the NPC's level, you get a bonus reduction to the suspicion rate, otherwise you get a penalty of an increased rate. The bonus/penalty is always 25% of the character's level for each point of difference between the two, and is limited to a maximum bonus of -95%, and an inherent maximum penalty of +75%.

The skill modifier is calculated using the formula:

The creatureLevel value on the right hand side of the division operator is limited to a minimum of 1.0, as to avoid dividing by zero. Note that the above table's results are not a direct result of this calculation! They have had their sign inverted to fit the general-use final suspicion rate calculation: suspicionRate = suspicionRate + (suspicionRate * skillModifier).

As an example, here are the calculations if: