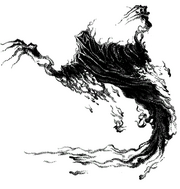 Bestiary image of a Shadow

Shadows are a race of creatures in Pillars of Eternity.

Shadows are created when creatures with heavily fractured souls die without re-entering the cycle of rebirth. Because these souls are damaged, they drain essence from other creatures in a futile attempt to repair themselves. The more essence they steal, the more powerful and dangerous they become. As they suck up essence, they pick up bits of corporeal matter, giving them a visible, if indistinct, form. Luckily, shadows can only draw a small bit of spiritual energy from souls still attached to a body or bound to an object. They mainly rely on creatures like the pŵgra, who can draw souls out of their physical form, to help them obtain the essence they crave.

Shadows have been known to draw spiritual energy from people while they sleep, when their souls are not bound as strongly to their bodies. This usually results in horrible nightmares that leave the person in an exhausted state the next day. If an entire town shares nightmares, it’s highly probable that a strong shadow has taken up residence there.

Since shadows absorb spiritual energy, they are hard to detect by creatures that rely on spiritual sight. This has led to experiments in binding shadows to armor or other objects to act as a cloak to obscure those who do not wish to be seen by such creatures.

Phantoms are souls that did not properly separate from the body after death. This usually happens as a result of severe trauma, particularly in the case of a violent death. Unlike lost souls, which are incapable of interacting with or being detected by normal mortals, phantoms (like Shadows and Cean Gŵla) maintain a connection to the physical world. They will attack other life forms without discrimination.

Phantoms can also come from people who lived particularly chaotic lives, including violent criminals and the insane. Anyone can become a phantom under the right circumstances. The fear of phantoms – and their association with the mentally ill – result in shunning across many communities.