The watcher is distinct from other playable party members in that they must always be a member of the party, and they are always the primary party speaker in conversations and skill and attribute checks outside of scripted interactions. However, companions will interject when it makes sense for them to do so (as seen in Infinity Engine games).[1][2]

The Watcher has several abilities that are not available to other party members.

In Pillars of Eternity:

In Pillars of Eternity II: Deadfire:

The early details of the Watcher's life, including their background and culture are determined by the player, and as such, this wiki is not able to give a reasonable account of this part of their life. Similarly, the details of the Watcher's life during the time period of the games are determined by player choices, and no two players will have exactly the same experiences. There are, however, some details that will be constant across all playthroughs.

Prior to the beginning of Pillars of Eternity, the player travelled from their home to the Dyrwood, a nation that 15 years prior had experienced the Saint's War, resulting in the destruction of the god Eothas. The country was suffering from a plague of Hollowborn, infants born without souls, that many believed was punishment for killing the god. The local lord, Raedric VII, offered new settlers land in an effort to boost the population.

During the journey through The Dyrwood, the player's caravan is ambushed by a group of Glanfathan. After the ambush, a bîaŵac stormed through the area, causing the player to flee. After passing through some Engwithan ruins, they stumble across a secret ritual that inadvertently transformed them into a Watcher, one who can see and speak with souls. The ritual also awakens their soul, giving them horrible visions, waking nightmares of a past life that threaten their sanity.

The player sought help in the nearby village of Gilded Vale where two notable companions are introduced: Aloth Corfiser and Edér Teylecg. After communing with a dead animancer (Caldara de Berranzi) the player learns that they are a Watcher (and becomes known as "the Watcher"). The animancer directs them to Maerwald, a watcher at Caed Nua. Unfortunately, Maerwald also has an awakened soul, and the visions of his past life have driven him crazy. In his confusion he attacks the Watcher, who is forced to kill him. The Watcher then becomes the owner of Caed Nua.

Prior to his death, Maerwald gave the Watcher a lead to seek a group known as the Leaden Key in the city of Defiance Bay. After investigating the group with the aid of a local cipher (Lady Webb), the Watcher learns that a man named Thaos ix Arkannon had led the ritual that awakened their soul. The Watcher has visions that tie them to Thaos in a past life. During a hearing to decide the fate of the practice of animacy, Thaos kills the duc, causing chaos to erupt in the city.

The Watcher perused Thaos to Twin Elms. After communing with the gods at Teir Evron and gaining divine assistance, the Watcher confronts and defeats Thaos. In doing so, they learn the great secret that Thaos had protected: that the ancient empire of Engwith had transformed themselves into the gods. The Watcher also learns that in a past life they had been a brutal inquisitor that aided Thaos, even after learning the true origin of the gods. The revelation and confrontation ends the maddening visions. The Watcher then resolved the Hollowborn crisis after interacting with the machine Thaos had used to divert souls he intended to empower Woedica with.

Their visions finally put to rest and the hollowborn crisis ended, the Watcher retired to their stronghold of Caed Nua, built atop a massive statue of pure adra, where they ruled in relative peace and prosperity. 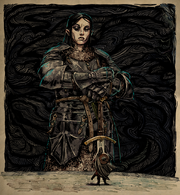 The Watcher and Berath.

5 years later, Eothas summoned the strength to embody the statue of Maros Nua, located directly below Caed Nua. The event effectively destroys Caed Nua and kills over 300 people, nearly including the Watcher. Part of the Watcher's soul is absorbed by Eothas. What remains of the Watcher's soul arrives in The Beyond. Berath intervenes by sending the Watcher back to their body, as long as he or she agrees to follow Eothas and uncover his motives. The Watcher becomes known as "The Herald of Berath".

The Watcher awakes in the Deadfire Archipelago during a storm aboard The Defiant in pursuit of Eothas. After a scuffle with a group of pirates (the Príncipi sen Patrena) and crashing on the island of Port Maje, the Watcher learns that Eothas is seeking pillars of luminous adra. Governor Clario directs them to seek Queen Onekaza II in Neketaka, who knows the locations of all luminous adra pillars.

After being visited by the gods, the Watcher arrives in Neketaka and finds the city is at odds with two major trading companies: the Vailian Trading Company and the Royal Deadfire Company. The queen directs the Watcher to Hasongo, where Eothas left a path of destruction in his pursuit of a vein of luminous adra. The Watcher learns that Eothas is headed next to Magran's Teeth. After catching up with the god, he reveals his plans to the Watcher: He will go to the lost city of Ukaizo and stop The Wheel of reincarnation. The revelation strikes chaos in the major factions of the Deadfire and the other gods.

The Watcher journeys to the lost city of Ukaizo and confronts Eothas a final time. There, Eothas destroys the great machine that directs the flow of The Wheel, stopping the process of rebirth in Eora.