The Wheel is a natural phenomenon in Eora that is responsible for the cycle of rebirth, allowing souls to pass from one life to another.

When an individual dies, their soul moves forward into the In-Between, which is a shadow world where souls wander after death. Using pillars of adra, souls then enter a place known as The Beyond, the realm of the gods, before they are reincarnated back into the world.[1] Most times this process takes several years, but it can also be very brief, with a soul reincarnating immediately.[2]

Souls are assigned to new births via a soul lottery, although sometimes the gods will intervene directly. Many kith devote themselves to a particular god to avoid their soul ending up in the lottery.[3] The gods may use these souls in different ways:

Over two-thousand years ago, the Engwithans (an ancient civilization) learned to manipulate souls. During their time, the Wheel caused many soul maladies because the flow of souls was inconsistent and without real direction.[6] Together with the Huana in the ancient city of Ukaizo, the Engwithans constructed a giant machine to seize control of the process. The machine steered souls into The Beyond from the In-Between, much like damming a river, to control and direct the flow of souls.[7]

The Engwithans, who became the gods, took direct roles in controlling the newly improved process. For example, Berath became the key figure in maintaining the metaphysical cycle, while Eothas helps keep souls in motion.[6] The gods use the essence that a soul "sheds" in the Wheel (known as entropy) to sustain themselves.[8] 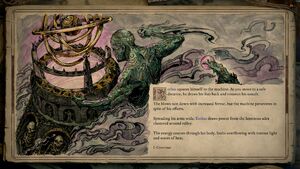 Eothas attempting to destroy the Engwithan machine that controls the wheel. Skeletal bodies of the divine titans are visible in the lower left.[9]

The tampering of the Engwithans was so extensive that over the centuries the natural rebirth process became reliant on the machine at Ukaizo. The process had deteriorated to the point that it could not return to its original state.[7]

In 2828 AI, Eothas, in an effort to diminish the role of the gods and elevate kith, destroyed the machine in Ukazio, grinding the process to a halt. Souls from newly deceased now pool in the In-Between, unable to pass to The Beyond and to new births.