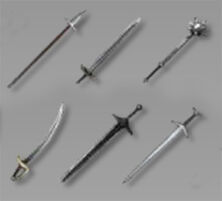 Weapons are any wieldable items that a player can use to inflict damage in combat. Weapons come in a variety of categories and qualities. Here they are grouped by their usefulness in close combat (melee) or at a distance (ranged), and by damage type.

All weapons are used either for melee or ranged combat. Melee weapons are grouped by their relative handedness and speed (fast one-handed, larger/heavier one-handed, and two-handed). Each weapon or type of ammunition deals a certain type of damage (slashing, piercing, crushing, etc.), which represents how well it will do against various creatures' immunities or protective equipment (e.g. ordinary mail is 40% worse against crushing attacks).[1]

A weapon's value is calculated by using its quality and any applied magical enchantments. Weapon enchantments are balanced around their handedness and speed.[2] There are twenty-eight base weapon types, there are standard, fine, exceptional and superb quality variants, and two unique (mid and high power) versions for each base type.[3][4]

There are no restrictions on what types of weapons characters can use, though specific classes offer bonuses for specific types, e.g. wizards can gain bonuses with wands, rods, and scepters via their passive AoE talent Blast.[5]

Besides other differences, almost every weapon type has a distinguishing characteristic that sets it apart from similar weapons. This is called weapon type bonus. For example, pikes have an extended reach that allows their wielders to strike at targets from farther away; flails ignore a portion of shield-based deflection; estocs negate DR; etc.

Bows and crossbows have the largest attack range among all the ranged weapons in the game. Bows are the fastest to use. Crossbows are slower to reload/fire than hunting bows or war bows but they do more damage. The more powerful Arbalests can't be cocked by hand and need to be planted and cranked, and thus are slower to reload than crossbows, but still faster than Firearms.

Firearms are very slow to reload, taking longer to reload than any other weapons and aren't very accurate, but they make up for it by dealing high damage, their low base Interrupt value and unique advantage in dealing with Wizards standard magical defense.

Arquebuses do the most damage per shot of the firearms and have the lowest accuracy penalty but are the slowest to reload. Pistols do less damage than arquebuses and have a higher accuracy penalty but reload faster. Blunderbusses reload as fast as pistols and are quite inaccurate, but they fire 6 projectiles that each do a small amount of damage. If the target does not have much armor and has low Deflection, or if it's from a Sneak Attack, blunderbusses are the most devastating.

Magical Implements are ranged magical missile weapons, that are quite fast and accurate, but not very powerful and have low interrupt value. Wizards gain a bonus via their Blast ability when using Magical Implements.

Different melee weapons will have different attack speeds, but for most weapons will be categorized by their relative handedness and speed (Fast One-Handed, Large One-Handed, and Two-Handed). Fast one-handed weapons attack more frequently than large one-handed weapons. Two-handed Weapons are almost universally hard-hitting weapons, that can deal more damage per-hit than their one-handed counterparts, but you cannot use a shield with them or use a second weapon.